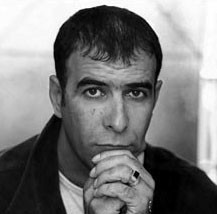 In Independence, Hassan makes his interviewees uncomfortable; but in Invasion, he makes his audience squirm in their seats as well. This isn’t accomplished through gory footage (although a close-up on a gunshot wound in a 77-year-old man’s hand certainly qualifies), but because of his interview with an Israeli soldier who bulldozed homes in Jenin.

“We entered at night,” the soldier says, just as Hassan cuts to footage of young boys playing on the gate of a home in Jenin like a jungle gym. The viewers then meet various residents of Jenin, including Muhammed, who says that “every time the Israeli army enters the camp they occupy my house.” He adds, “During the eleven days of invasion we had no electricity, no water.”
Hassan then portrays residents trying to live within the destruction. He finds young boys playing in a shelled-out school. They jump from desk to desk, tearing down and playing with posters hanging on the wall, while plaster dust flies everywhere. One of the boys holds up to the camera a bullet shell he finds in the middle of the classroom.

In one house, Hassan documents a Star of David spray painted on the wall, as well as the door. Apparently the soldiers positioned themselves in the house to command the square below and to shoot through the windows. The mother of the man who owns the house tells Hassan, “Since ‘48 I haven’t had one good day that wasn’t filled with horror.”

Hassan then cuts back to his interview with the Israeli soldier, who says, “Each [house] took something like ten minutes, and then they were gone.”

However, not only were houses gone, but lives were lost as well. Ranya, a young Jenin resident, lost Taha, her fiance. She tells Hassan that they agreed about everything, including what color couches to purchase. They planned on having one boy and one girl. She mentions that in the last two days of Taha’s life, he told her “to be careful.” Because he couldn’t bury him properly, Ranya’s father buried his future son-in-law under his window.

Hassan then interviews a family whose home was subject to graffiti by Israeli soldiers. Among the slogans written in Hebrew was, “Thank you for the warm hospitality. See you at the peace talks.” One of the family member says, “No one believed we’d see each other.” In one of the more chilling moments of the film, Hassan goes with one of the family members to her home for the first time after the invasion. As she holds her child, the young woman quietly looks around, and sees her possessions strewn about the floor and her children’s stuffed animals lying on the ground.

The viewer is then transported back to the interview with the Israeli soldier. As they watch footage of residents looking for a body that was trapped in the rubble, the soldier asks Hassan, “Everything collapsed on him?” He then proceeds to claim that the man’s death could have been prevented if he had laid down in the street. Hassan, completely in control of the interview, then informs the soldier, whom we now know is named Yuval, that the man was handicapped.

The soldier seems more uncomfortable, and tells Hassan, “this is a case of miscommunication,” and adds that he is sure that he “didn’t tear a house on anyone.”

However, it is hard to excuse what is shown next as a case of miscommunication. The aforementioned 77 year old man, named Ali Yousef Faid, explains how he was shot in the hand by a sniper while escorting his daughter-in-law to a nearby school for shelter. While lying on the ground, a soldier told the man to stay still, and then proceeded to shoot a second bullet into his leg.

Yuval then admits that “There were horrors, but none that I caused.” Hassan asks him why he wasn’t a conscientious objector, and he responds, “Someone will do the job … Someone had to do it.”

Hassan then shows to Yuval footage one of his friends laughing while explaining that Yuval tore down a building to dispose his excrement without being killed, but then adds that Yuval was traumatized by his experience in Jenin. Yuval, who at first offered little physical reaction to Hassan’s questions and put up a tough-guy facade, seems to soften, and acknowledges, “I even have dreams about what happened there.”

Yuval, after watching the interview of him that took place on the waterfront on a sunny day, asks, “how does this fit in the film?” Yuval, who is then revealed to be a fisherman, is clearly aware how much he and his friend’s interview contrasts with the footage of destruction and devastation in Jenin. Aware of Yuval’s vulnerability, Hassan shoots close-ups of his face, forcing the viewer to recognize that this man was one of the perpetrators of the destruction, and yet he is still human.

Although this method of humanizing the “enemy” may anger or upset some audiences and cause them to wonder why Hassan is giving the soldier a voice, it is effective. Viewers are forced to study his face and recognize that he is indeed a fellow human being. And yet Hassan refrains from moralizing the soldier’s story; he lets the viewers take away what they want. In some ways this is a noble effort; if the U.S. and Israeli media made the same efforts to portray Palestinians as complex human beings, and not as blood-thirsty suicide bombers, maybe a genuine peace dialogue could start and Hassan could take a break from asking his tough questions.