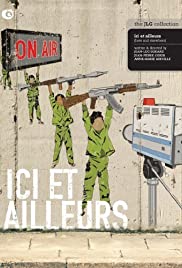 Made as part of the "Dziga Vertov group," this controversial and rarely
screened experimental film was commissioned by the PLO in 1967 and
originally titled Until Victory. Following the defeat in the Six Day War,
the film was radically transformed, becoming a meditation on how cinema
records history, and marking the beginning of Godard's radical video
period. Against the back of post1968 Paris, the film contrasts a French
family ("Here") with an impressionstic portrait of a Palestine
("Elsewhere") reflected and distorted by television, books and pictures. "A
thoughtful and provocative essay on... the problems of recording history
and of making political statements on film...The results are a rare form of
lucidity and purity" - Chicago Reader - Arts & Entertainment