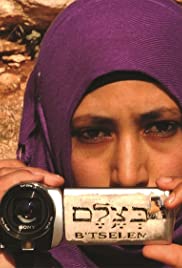 In the Image: Palestinian Women Capture the Occupation (2014)

In the Image: Palestinian Women Capture the Occupation

Making the invisible, visible. Palestinian women living under occupation in the West Bank. Changing the conversation using video cameras as a form of non-violent activism.
A documentary about Palestinian women in the West Bank who partner with an Israeli human rights organization and use cameras to capture human rights violations by settlers and the military, as well as the nuances of their own lives. Through interviews and using the shocking footage they have filmed, the film introduces these non-violent activists, humanizes them and sheds light on the complicated situations that have become daily life for Palestinian citizens living in the occupied territories. It shatters the media stereotypes we have come to accept.