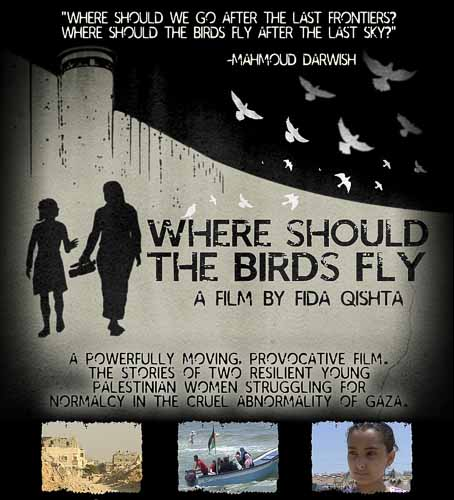 Where should the birds fly

Where Should The Birds Fly is the compelling and moving story of two remarkable young women, the future of Palestine, who personify the struggle to maintain humanity, humor and hope, to find some degree of normality in the brutal abnormality that has been imposed on them.
Mona is an 11 year old girl of remarkable wisdom. Her family died under Israeli rockets. Fida Qishta, the filmmaker, is a 27 year old journalist. With her crew she has documented the lives of the people of Gaza.
This is a Palestinian film, the first made by Palestinians. But it is a story that resonates across the bitter history of man's inhumanity to man: in the oil soaked poverty of the Niger Delta, in the destroyed state of Iraq, in the fierce resistance of the Warsaw Ghetto.
A young girl sits among the rubble of her family home. She talks of the many people she knows who have been killed. When asked if she lost many family members she says: "Not many. Just my mother, my father and my brother."
Mona is 10 years old. Omar stands before the rubble of the house he began building on the day his
first son was born. Over the next twelve years he painstakingly added brick upon brick, wiring, plumbing, a new room, another floor. A fine house for his growing family, filled with precious mementos, well-kept furniture, wall hangings, children's toys, all the necessary silver and flatware for
daily meals and special dinners. Twelve years to the day of his son's birth the bulldozers plowed into his home, destroying his family's shelter, possessions and security.
As the camera attempts to record the effect of this devastation, to read his emotions, he raises his hands gently: "What are we supposed to do now?"
Fida Qishta, a young Palestinian filmmaker and journalist from Rafah in Gaza has documented the horrific Israeli invasion and bombardment of Gaza in December 2008 and January 2009. Working with her crew of young Gazans, they have kept the cameras rolling for months, recording the struggle of the people of Gaza to retrieve some sense of normalcy from the absolute abnormality of life in the world's largest prison camp, sealed off on all sides by Israeli and Egyptian walls, barbed wire and military.